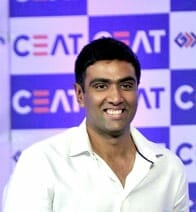 Ravichandran Ashwin ( born 17 September 1986) is an Indian international cricketer. An all-rounder who bats right-handed and bowls right-arm off break, Ashwin plays for Tamil Nadu in domestic cricket and Delhi Capitals in the Indian Premier League. He is the fastest Indian bowler (also in some records the joint fastest in the world) to reach the 50-, 100-, 150-, 200-, 250-, 300- and 350-wicket mark in Test cricket in terms of number of innings. In 2016, he became the third Indian to win the ICC Cricketer of the Year award.
Having achieved little success as an opening batsman at junior-level cricket, Ashwin dropped down the order and turned into an off-break bowler. He made his first-class debut for Tamil Nadu in December 2006 and captained the team the following season. But it was not until the 2010 Indian Premier League in which he played for the Chennai Super Kings, that he came into the limelight with his economical bowling and earned his maiden international call-up in the limited-overs formats in June 2010. He was the leading wicket-taker and player of the tournament of the 2010 Champions League Twenty20 in South Africa. He was also part of the Indian squad that won the 2011 Cricket World Cup. Later that year, he made his Test debut against West Indies and became the seventh Indian to take a five-wicket haul on Test debut. He took two five-wicket hauls and scored a century in that series and won the player of the series award.
Ashwin continued to succeed in the subcontinent but proved to be less effective in other places like Australia and England. In a home Test series against Australia in 2013, he took 29 wickets, the most by any Indian bowler in a four-match Test series. The same year, he took his 100th Test wicket in his 18th match, becoming the fastest Indian bowler to the milestone and the fastest in the world in over 80 years. In 2017, playing his 45th Test, Ashwin became the fastest bowler to pick up 250 Test wickets, bettering Dennis Lillee, who had achieved the landmark in 48 Tests. In October 2019, in his 66th Test match, Ashwin became the joint-fastest bowler, along with Muttiah Muralitharan, to take his 350th Test wicket.Ashwin is the only bowler in recent times, apart from Sri Lanka’s Ajantha Mendis to bowl the carrom ball. With four centuries in his Test career so far, Ashwin has earned the reputation of being a bowling all-rounder. He was a recipient of the Arjuna Award in 2014 and the BCCI’s international cricketer of the year for the 2012–13 season. He also won the ICC Cricketer of the year 2016 along with ICC Test Cricketer of the year 2016 in December 2016.