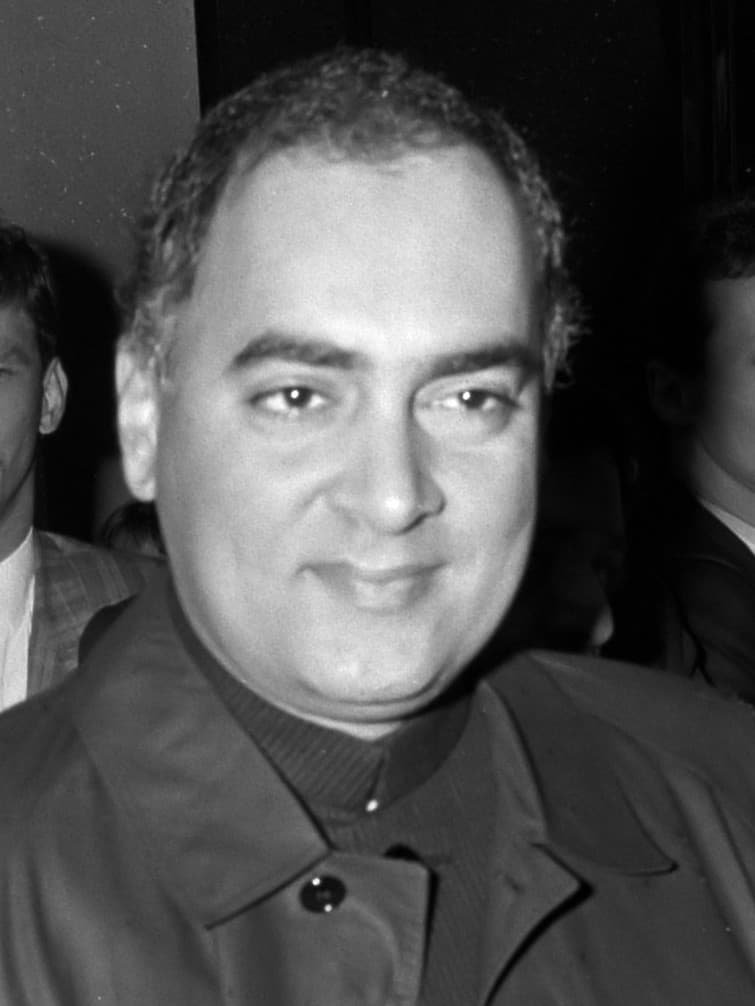 Rajiv Ratna Gandhi (20 August 1944 – 21 May 1991) was an Indian politician who served as the 6th Prime Minister of India from 1984 to 1989. He took office after the 1984 assassination of his mother, Prime Minister Indira Gandhi, to become the youngest Indian Prime Minister at the age of 40.
Gandhi was from the politically powerful Nehru–Gandhi family, which had been associated with the Indian National Congress party. For much of his childhood, his maternal grandfather Jawaharlal Nehru was Prime Minister. Gandhi attended college in the United Kingdom. He returned to India in 1966 and became a professional pilot for the state-owned Indian Airlines. In 1968, he married Sonia Gandhi; the couple settled in Delhi to a domestic life with their children Rahul Gandhi and Priyanka Gandhi Vadra. For much of the 1970s, his mother Indira Gandhi was prime minister and his brother Sanjay Gandhi an MP; despite this, Rajiv Gandhi remained apolitical. After Sanjay’s death in a plane crash in 1980, Gandhi reluctantly entered politics at the behest of Indira. The following year he won his brother’s Parliamentary seat of Amethi and became a member of the Lok Sabha—the lower house of India’s Parliament. As part of his political grooming, Rajiv was made general secretary of the Congress party and given significant responsibility in organising the 1982 Asian Games.
On the morning of 31 October 1984, his mother was assassinated by one of her bodyguards; later that day, Gandhi was appointed Prime Minister. His leadership was tested over the next few days as organised mobs rioted against the Sikh community, resulting in anti-Sikh riots in Delhi. That December, Congress party won the largest Lok Sabha majority to date, 411 seats out of 542. Rajiv Gandhi’s period in office was mired in controversies; perhaps the greatest crises were the Bhopal disaster, Bofors scandal and Mohd. Ahmed Khan v. Shah Bano Begum. In 1988, he reversed the coup in Maldives, antagonising militant Tamil groups such as PLOTE, intervening and then sending peacekeeping troops to Sri Lanka in 1987, leading to open conflict with the Liberation Tigers of Tamil Eelam (LTTE). In mid-1987, the Bofors scandal damaged his corruption-free image and resulted in a major defeat for his party in the 1989 election.
Gandhi remained Congress President until the elections in 1991. While campaigning for the elections, he was assassinated by a suicide bomber from the LTTE. His widow Sonia became the president of the Congress party in 1998 and led the party to victory in the 2004 and 2009 parliamentary elections. His son Rahul Gandhi is a Member of Parliament and was the President of the Indian National Congress till 2019. In 1991, the Indian government posthumously awarded Gandhi the Bharat Ratna, the country’s highest civilian award. At the India Leadership Conclave in 2009, the Revolutionary Leader of Modern India award was conferred posthumously on Gandhi.