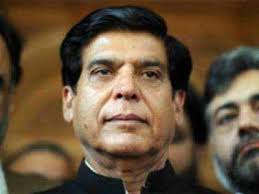 Raja Pervaiz Ashraf ( born 26 December 1950) is a Pakistani businessman, agriculturist, and politician who served as 19th prime minister of Pakistan from 22 June 2012 until completing his designated term on 16 March 2013. He is a Member of the National Assembly of Pakistan from NA-58 (Rawalpindi-II), and also serves as the Senior Vice President of Pakistan Democratic Movement (PDM), an anti-establishment coalition of political parties in Pakistan.Prior to be elevated as Prime minister, he previously served as the Minister for Water and Power in the Yousaf Raza Gillani-led government from March 2008 to February 2011. A senior-ranking leader in the Pakistan Peoples Party (PPP) from Rawalpindi District, Ashraf assumed premiership on 22 June 2012 after Yousaf Raza Gillani was disqualified over contempt of court charges. Shortlisted by the PPP as a candidate for the post, he was eventually elected based on a 211–89 vote in the National Assembly. Tackling the corruption scandals, one of the major achievements during his premiership was his interest to develop and implement hydro projects in particular Neelum-Jhelum project of 970 MW.
The project had received a big jolt when the Chinese Exim Bank refused to release $448 million loan linking it to the restoration of the Safe City Project in Islamabad which has been stopped by the Supreme Court of Pakistan. During his tenure Water and Power Development Authority (WAPDA) had launched a number of mega and medium-sized projects in Gilgit–Baltistan.