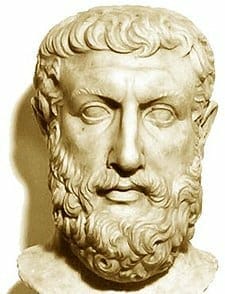 Parmenides of Elea ( fl. late sixth or early fifth century BC) was a pre-Socratic Greek philosopher from Elea in Magna Graecia (meaning “Great Greece,” the term which Romans gave to Greek-populated coastal areas in Southern Italy). He is thought to have been in his prime (or “floruit”) around 475 BC.Parmenides has been considered the founder of metaphysics or ontology and has influenced the whole history of Western philosophy. He was the founder of the Eleatic school of philosophy, which also included Zeno of Elea and Melissus of Samos. Zeno’s paradoxes of motion were to defend Parmenides’ view.
The single known work by Parmenides is a poem whose original title is unknown but which is often referred to as On Nature. Only fragments of it survive, but its importance lies in the fact that it contains the first sustained argument in the history of Western philosophy. In his poem, Parmenides prescribes two views of reality. In “the way of truth” (a part of the poem), he explains how all reality is one, change is impossible, and existence is timeless, uniform, and necessary. In “the way of opinion”, Parmenides explains the world of appearances, in which one’s sensory faculties lead to conceptions which are false and deceitful, yet he does offer a cosmology.