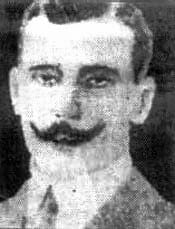 Norman Gilbert Pritchard (23 June 1875 – 30 October 1929), also known by his stage name Norman Trevor, was a British-Indian athlete and actor who became the first Asian-born athlete to win an Olympic medal when he won two silver medals in athletics at the 1900 Paris Olympics representing India. He was of British ethnicity and moved to Great Britain permanently in 1905, where he became a successful stage actor, and later moved to the United States to work in Hollywood.