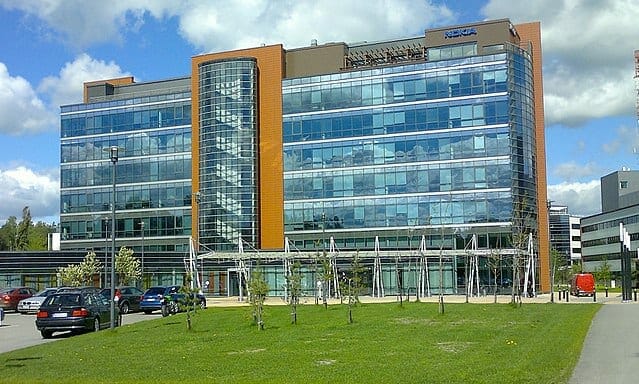 Nokia Corporation is a Finnish multinational telecommunications, information technology, and consumer electronics company, founded in 1865. Nokia’s headquarters are in Espoo, Finland, in the greater Helsinki metropolitan area. In 2018, Nokia employed approximately 103,000 people across over 100 countries, did business in more than 130 countries, and reported annual revenues of around €23 billion. Nokia is a public limited company listed on the Helsinki Stock Exchange and New York Stock Exchange. It is the world’s 415th-largest company measured by 2016 revenues according to the Fortune Global 500, having peaked at 85th place in 2009. It is a component of the Euro Stoxx 50 stock market index.The company has operated in various industries over the past 150 years. It was founded as a pulp mill and had long been associated with rubber and cables, but since the 1990s has focused on large-scale telecommunications infrastructures, technology development, and licensing. Nokia is a major contributor to the mobile telephony industry, having assisted in the development of the GSM, 3G and LTE standards (and currently in 5G), and was once the largest worldwide vendor of mobile phones and smartphones. After a partnership with Microsoft and subsequent market struggles, its mobile phone business was bought by Microsoft, creating Microsoft Mobile as its successor in 2014. After the sale, Nokia began to focus more extensively on its telecommunications infrastructure business and on Internet of things technologies, marked by the divestiture of its Here mapping division and the acquisition of Alcatel-Lucent, including its Bell Labs research organization. The company then also experimented with virtual reality and digital health, the latter through the purchase of Withings. The Nokia brand has since returned to the mobile and smartphone market through a licensing arrangement with HMD Global. Nokia continues to be a major patent licensor for most large mobile phone vendors. As of 2018, Nokia is the world’s third-largest network equipment manufacturer.The company was viewed with national pride by Finns, as its mobile phone business made it by far the largest worldwide company and brand from Finland. At its peak in 2000, during the telecoms bubble, Nokia alone accounted for 4% of the country’s GDP, 21% of total exports, and 70% of the Helsinki Stock Exchange market capital.