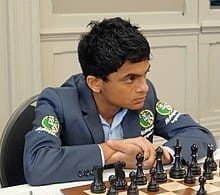 Nihal Sarin (born 13 July 2004) is an Indian chess player. A chess prodigy, he achieved the title of Grandmaster at age 14. He is also the fourth youngest player in history to cross the Elo rating mark of 2600, accomplishing this feat at age 14.Nihal won the Gold Medal as part of the Indian team in the 2020 FIDE Chess Olympiad held online. He won the U-18 World Youth Championship held online in rapid format in 2020. In 2019, aged 15, Nihal had become the youngest Indian to play in the World Cup 2019 where he managed to reach the second round.Nihal was the world under-10 champion in 2014 in Durban, South Africa. In 2015, he tied for first place in the world under-12 championship in Porto Carras, Greece taking the silver medal on tiebreaks.