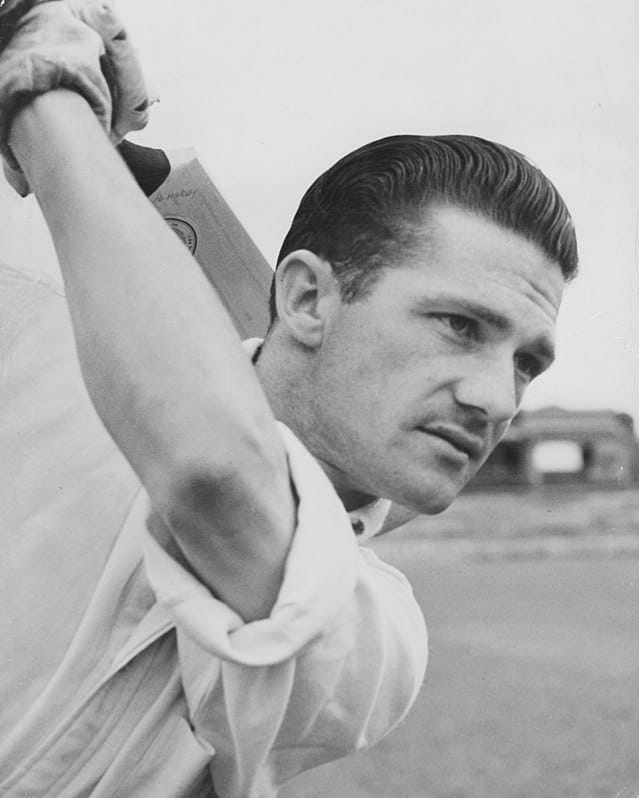 Robert Neil Harvey (born 8 October 1928) is an Australian former cricketer who was a member of the Australian cricket team between 1948 and 1963, playing in 79 Test matches. He was the vice-captain of the team from 1957 until his retirement. An attacking left-handed batsman, sharp fielder and occasional off-spin bowler, Harvey was the senior batsman in the Australian team for much of the 1950s and was regarded by Wisden as the finest fielder of his era. Upon his retirement, Harvey was the second-most prolific Test run-scorer and century-maker for Australia.
One of six cricketing brothers, four of whom represented Victoria, Harvey followed his elder brother Merv into Test cricket and made his debut in January 1948, aged 19 and three months. In his second match, he became the youngest Australian to score a Test century, a record that still stands. Harvey was the youngest member of the 1948 Invincibles of Don Bradman to tour England, regarded as one of the finest teams in history. After initially struggling in English conditions, he made a century on his Ashes debut. Harvey started his career strongly, with six centuries in his first thirteen Test innings at an average over 100, including four in 1949–50 against South Africa, including a match-winning 151 not out on a sticky wicket. As Bradman’s team broke up in the 1950s due to retirements, Harvey became Australia’s senior batsman, and was named as one of the Wisden Cricketers of the Year in 1954, in recognition of his feat in scoring more than 2,000 runs during the 1953 tour of England.
In 1957, he was passed over for the captaincy and was named as the deputy of Ian Craig, who had played just six matches, as Australia sought to rebuild the team with a youth policy following a decline in the team. Craig later offered to demote himself due to poor form, but Harvey prevented him from doing so. At any rate, Craig fell ill the following season, but Harvey had moved interstate, so Richie Benaud was promoted to the captaincy ahead of him. Harvey continued in the deputy’s role until the end of his career, but he was captain for only one Test match. In the Second Test at Lord’s in 1961, when Benaud was injured, Harvey led the team in the “Battle of the Ridge” on an erratic surface, grinding out a hard-fought victory. Only Bradman had scored more runs and centuries for Australia at the time of Harvey’s retirement. Harvey was best known for his extravagant footwork and flamboyant stroke play, as well as his fielding. Harvey was particularly known for his innings in conditions unfavourable to batting, performing when his colleagues struggled, such as his 151 not out in Durban, his 92 not out in Sydney in 1954–55, and his 96 on the matting in Dhaka. In retirement, he became a national selector for twelve years but in recent times is best known for his strident criticism of modern cricket. In 2000, he was inducted into the Australian Cricket Hall of Fame in and selected in the Australian Cricket Board’s Team of the Century. In 2009, Harvey was one of the 55 inaugural inductees into the ICC Cricket Hall of Fame.