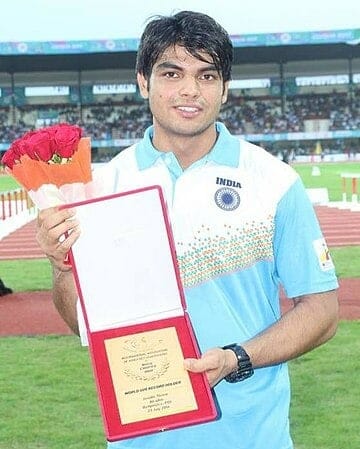 Neeraj Chopra VSM (born 24 December 1997) is an Indian track and field athlete who competes in the javelin throw. A Junior Commissioned Officer (JCO) in the Indian Army, Chopra is the first track and field athlete to win an Olympic gold medal for India, winning the medal during the 2020 Tokyo Olympics in the men’s javelin throw.In the 2016 IAAF World U20 Championships, Chopra achieved a world under-20 record of 86.48 m. Debuting at the 2018 Commonwealth Games and the 2018 Asian Games, at which he was the opening flag-bearer, he won gold medals in both Games. In his Olympics debut, Chopra won the gold medal on 7 August 2021 with a throw of 87.58m in his second attempt. He is one of only two Indians to have won an individual Olympic gold medal (alongside Abhinav Bindra), as well as the youngest-ever Indian gold medalist in an individual event and the only one to have won gold in his Olympic debut.