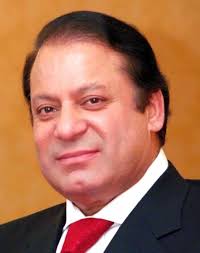 Mian Muhammad Nawaz Sharif (born 25 December 1949) is a Pakistani businessman and politician who served as the prime minister of Pakistan for three non-consecutive terms. Sharif is the longest-serving prime minister of Pakistan having served a total of more than 9 years.
Born into the upper-middle class Sharif family in Lahore, Sharif is the son of Muhammad Sharif, the founder of Ittefaq and Sharif Group. He is the elder brother of Shehbaz Sharif, who also served as the chief minister of Punjab. According to the Election Commission of Pakistan, Sharif is the one of the wealthiest men in Pakistan, with an estimated net worth of at least 1.6 billion Pakistani rupees. Most of Sharif’s wealth originates from his businesses in steel construction.
Before entering politics in the 1970s, Sharif studied business at Government College and law at the University of Punjab. In 1981, Sharif was appointed by President Zia as the minister of finance for the province of Punjab. Backed by a loose coalition of conservatives, Sharif was elected as the Chief Minister of Punjab in 1985 and re-elected after the end of martial law in 1988. In 1990, Sharif led the conservative Islamic Democratic Alliance and became the 12th prime minister of Pakistan.
After being ousted in 1993, when president Ghulam Ishaq Khan dissolved the National Assembly, Sharif served as the leader of the opposition to the government of Benazir Bhutto from 1993 to 1996. He returned to premiership after the Pakistan Muslim League (N) (PML-N) was elected in 1997, and served until his removal in 1999 by military takeover and was tried in a plane hijacking case which was argued by Barrister Ijaz Hussain Batalvi, assisted by Khawaja Sultan senior Advocate, Sher Afghan Asdi and Akhtar Aly Kureshy Advocate. After prison and exile for more than a decade, he returned to politics in 2011 and led his party to victory for a third time in 2013.
In 2017, Sharif was removed from office by the Supreme Court of Pakistan regarding revelations from the Panama Papers case. In 2018, the Pakistani Supreme Court disqualified Sharif from holding public office, and he was also sentenced to ten years in prison by an accountability court. Sharif is currently in to London for medical treatment on expired bail. The IHC declared him an absconder and issued arrest warrants for him in late 2020.