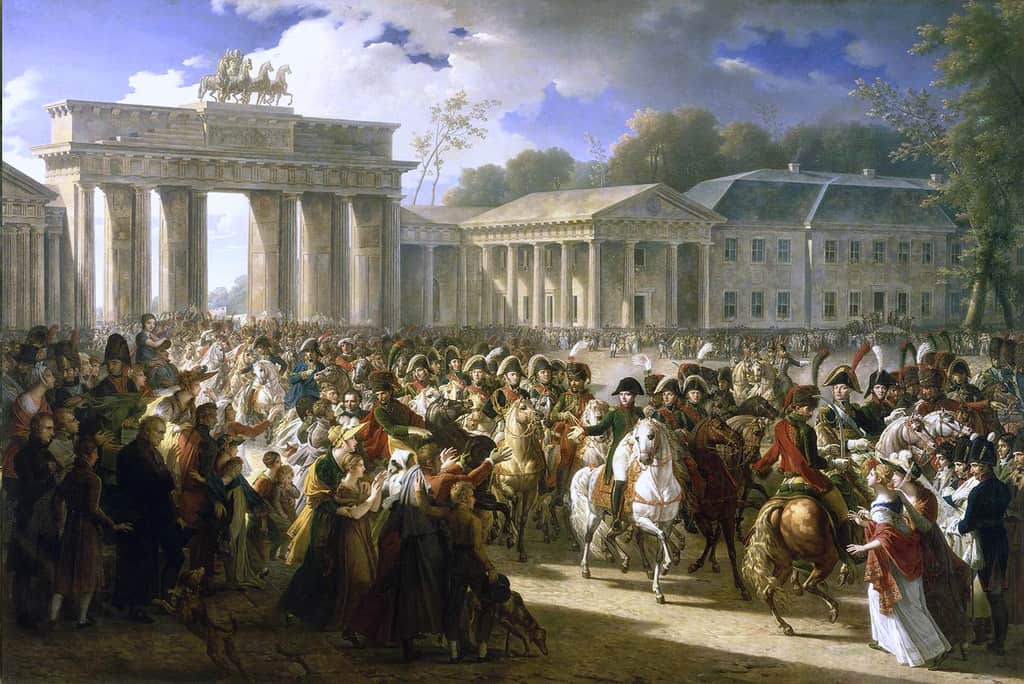 The Napoleonic Wars (1803–1815) were a series of major conflicts pitting the French Empire and its allies, led by Napoleon I, against a fluctuating array of European powers formed into various coalitions. It produced a brief period of French domination over most of continental Europe. The wars stemmed from the unresolved disputes associated with the French Revolution and its resultant conflict. The wars are often categorized into five conflicts, each termed after the coalition that fought Napoleon: the Third Coalition (1805), the Fourth (1806–07), the Fifth (1809), the Sixth (1813–14), and the Seventh (1815).
Napoleon, upon ascending to First Consul of France in 1799, had inherited a republic in chaos; he subsequently created a state with stable finances, a strong bureaucracy, and a well-trained army. In 1805, Austria and Russia formed the Third Coalition and waged war against France. In response, Napoleon defeated the allied Russo-Austrian army at Austerlitz in December 1805, which is considered his greatest victory. At sea, the British severely defeated the joint Franco-Spanish navy in the Battle of Trafalgar on 21 October 1805. This victory secured British control of the seas and prevented the invasion of Britain itself. Concerned about increasing French power, Prussia led the creation of the Fourth Coalition with Russia, Saxony, and Sweden, and the resumption of war in October 1806. Napoleon quickly defeated the Prussians at Jena and the Russians at Friedland, bringing an uneasy peace to the continent. The peace failed, though, as war broke out in 1809, when the badly prepared Fifth Coalition, led by Austria, was quickly defeated at Wagram.
Hoping to isolate and weaken Britain economically through his Continental System, Napoleon launched an invasion of Portugal, the only remaining British ally in continental Europe. After occupying Lisbon in November 1807, and with the bulk of French troops present in Spain, Napoleon seized the opportunity to turn against his former ally, depose the reigning Spanish royal family and declare his brother King of Spain in 1808 as José I. The Spanish and Portuguese revolted with British support and expelled the French from Iberia in 1814 after six years of fighting.
Concurrently, Russia, unwilling to bear the economic consequences of reduced trade, routinely violated the Continental System, prompting Napoleon to launch a massive invasion of Russia in 1812. The resulting campaign ended in disaster and the near destruction of Napoleon’s Grande Armée.
Encouraged by the defeat, Austria, Prussia, and Russia formed the Sixth Coalition and began a new campaign against France, decisively defeating Napoleon at Leipzig in October 1813 after several inconclusive engagements. The Allies then invaded France from the east, while the Peninsular War spilled over into southwestern France. Coalition troops captured Paris at the end of March 1814 and forced Napoleon to abdicate in April. He was exiled to the island of Elba, and the Bourbons were restored to power. But Napoleon escaped in February 1815, and reassumed control of France for around one hundred days. After forming the Seventh Coalition, the Allies defeated him permanently at Waterloo in June 1815 and exiled him to Saint Helena, where he died six years later.The Congress of Vienna redrew the borders of Europe and brought a period of relative peace. The wars had profound consequences on global history, including the spread of nationalism and liberalism, the rise of Britain as the world’s foremost naval and economic power, the appearance of independence movements in Latin America and subsequent collapse of the Spanish Empire and Portuguese Empire, the fundamental reorganization of German and Italian territories into larger states, and the introduction of radically new methods of conducting warfare, as well as civil law.