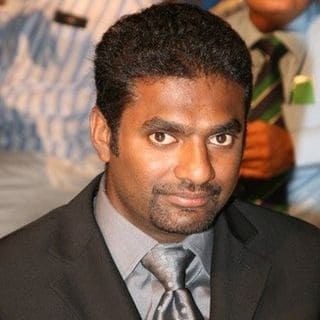 Deshabandu Muttiah Muralitharan (Tamil: முத்தையா முரளிதரன், Sinhala: මුත්තයියා මුරලිදරන් also spelt Muralidaran; born 17 April 1972) is a Sri Lankan cricket coach, former professional cricketer, businessman and a member of the ICC Cricket Hall of Fame. Averaging over 6 wickets per test match, Murali is regarded as one of the greatest and most successful bowlers ever to play international cricket. He is the only bowler to take 800 test wickets and 530+ ODI wickets. As of January 2022, he has taken more wickets in international cricket than any other bowler.Muralitharan’s international career was beset by controversy over his bowling action. Due to an unusual hyperextension of his congenitally bent arm during delivery, his bowling action was called into question on a number of occasions by umpires and sections of the cricket community. After biomechanical analysis under simulated playing conditions, Muralitharan’s action was cleared by the International Cricket Council, first in 1996 and again in 1999.Muralitharan held the number one spot in the International Cricket Council’s player rankings for Test bowlers for a record period of 1,711 days spanning 214 Test matches. He became the highest wicket-taker in Test cricket when he overtook the previous record-holder Shane Warne on 3 December 2007. Muralitharan had previously held the record when he surpassed Courtney Walsh’s 519 wickets in 2004, but he suffered a shoulder injury later that year and was overtaken by Warne. Muralitharan took the wicket of Gautam Gambhir on 5 February 2009 in Colombo to surpass Wasim Akram’s ODI record of 502 wickets. He retired from Test cricket in 2010, registering his 800th and final wicket on 22 July 2010 from his final ball in his last Test match.Muralitharan was rated the greatest Test match bowler by Wisden’s Cricketers’ Almanack in 2002, and in 2017 was the first Sri Lankan cricketer to be inducted into the ICC Cricket Hall of Fame. He won the Ada Derana Sri Lankan of the Year award in 2017.