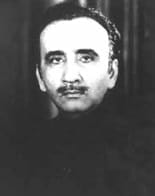 Portal of Pakistan PoliticsMohammad Khan Junejo (Urdu: محمد خان جونیجو; Sindhi: محمد خان جوڻيجو; born 18 August 1932 – 18 March 1993) was a Pakistani politician and an agriculturist who served as Prime Minister of Pakistan, having elected in this capacity in 1985 until being dismissed in 1988.Junejo, a powerful landowner, was educated in Karachi, having attended the St. Patrick’s College, and was trained as an agriculturist at the Agricultural Institute near Hastings in the United Kingdom. He gained public notice when he joined the Ayub administration and subsequently held cabinet portfolio of railways, health, communications and labour from 1963–69.After participating in the elections held in 1985, he was chosen to form the government on a Pakistan Muslim League’s platform, of which, he took over the party’s presidency. His government was noted for the support of conservatism, austerity measures that ultimately reduces the government budget deficits and repealed the emergency laws to allow the freedom of press and media in the country. Despite strong resistance and fierce opposition from President Zia-ul-Haq, Junejo authorized his Foreign Minister Yakob Khan to sign and ratified the Geneva Accords in 1988. His relations with President Zia-ul-Haq also soured when he opened the parliamentary inquiry on Ojhri Camp disaster, also in 1988.On 29 May 1988, Prime Minister Junejo was dismissed by President Zia who leveled charges on incompetency and economic stagflation and immediately called for new general elections. After the general elections held in 1988, he led his own faction while being ceremonial party’s presidency.