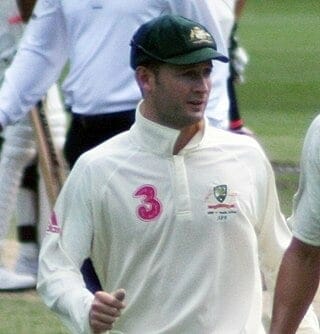 Michael John Clarke (born 2 April 1981) is an Australian former cricketer. He was captain of the Australian cricket team in both Test and One Day International (ODI) between 2011 and 2015, leading Australia to victory in the 2015 Cricket World Cup. He also served as captain of the Twenty20 International (T20I) side between 2007 and 2010. He is regarded as one of the best batsmen of his generation.
Nicknamed “Pup”, Clarke was a right-handed middle-order batsman, an occasional left-arm orthodox spin bowler and also a slip catcher. He represented New South Wales at a domestic level.
Clarke retired from all forms of cricket after the final Test of the 2015 Ashes series.