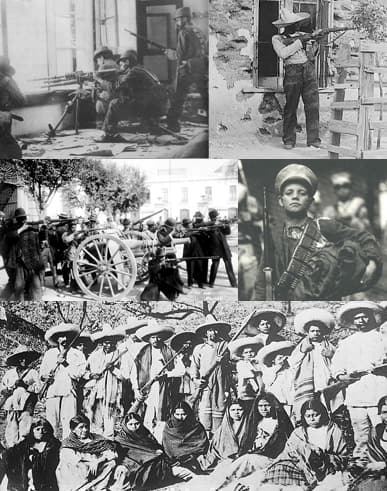 The Mexican Revolution was a major revolution, including a sequence of armed struggles, lasting roughly from 1910 to 1920, that transformed Mexican culture and government. Its outbreak in 1910 resulted from the increasing unpopularity of the 31-year-long regime of Porfirio Díaz and the regime’s failure to find a controlled solution to presidential succession. This resulted in a power struggle among competing elites, which created the opportunity for agrarian insurrection. Wealthy landowner Francisco I. Madero challenged Díaz in the 1910 presidential election, and following the rigged results, revolted under the Plan of San Luis Potosí.Armed conflict broke out in northern Mexico, led by Madero, Pascual Orozco, and Pancho Villa, and with support from portions of the middle class, the peasantry, and organized labor, Díaz was forced out. By the Treaty of Ciudad Juárez, Díaz resigned and went into exile, new elections were scheduled for the fall, and an interim presidency under Francisco León de la Barra was installed. The elections were held in 1911, and in a free and fair vote, Madero was overwhelmingly elected president, taking office in November.