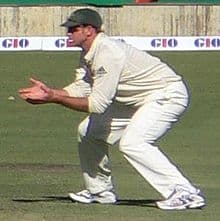 Matthew Lawrence Hayden (born 29 October 1971) is an Australian cricket commentator and former cricketer. His career spanned fifteen years. Hayden was a powerful and aggressive left-handed opening batsman.
Hayden holds the record for the highest score made by an Australian batsman in Tests (380). This is also the record for the highest individual test score by an opening batsman in Tests. His innings of 201 against India in Chennai remains the 2nd highest score by an Australian in India. He formed one of the most prolific opening partnerships in world Test cricket for Australia with Justin Langer, and in ODI cricket with Adam Gilchrist. Upon his retirement, in January 2009, Hayden’s Test average was 50.7; he had scored the second most runs in Test cricket by an opening batsman; and was equal 6th (with Jacques Kallis) on the all-time list for Test centuries.
Hayden retired from all forms of cricket in September 2012.In 2017, Hayden was inducted into the Australian Cricket Hall of Fame.In September 2021, Hayden was appointed as the Batting Coach of Pakistan for the 2021 ICC Men’s T20 World Cup.