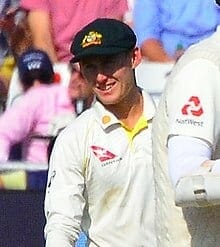 Marnus Labuschagne ( or ; born 22 June 1994) is an Australian cricketer who plays internationally for the Australian national team and domestically for Queensland. He also plays for Glamorgan in county cricket and for the Brisbane Heat in the Big Bash League. As of December 2021, Labuschagne is rated as the No. 1 batsman in the world in the ICC Test batting rankings.
In August 2019, Labuschagne was the first cricketer to become a concussion substitute in a Test match, replacing Steve Smith. Labuschagne was the leading run-scorer in Test matches in 2019. He rose to fourth place in the ICC Player Rankings during the year, a rise of 106 places. In January 2020, Labuschagne was named as the ICC Men’s Emerging Cricketer of the Year by the International Cricket Council (ICC), in February as Australia’s Test player of the year, and in April as one of the five Cricketers of the Year by Wisden Cricketers’ Almanack.