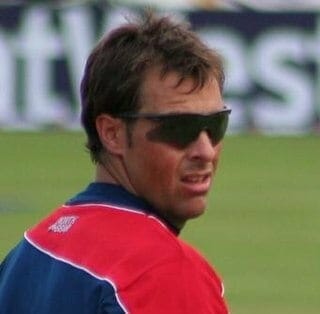 Marcus Edward Trescothick (born 25 December 1975) is an English former cricketer who played first-class cricket for Somerset County Cricket Club, and represented England in 76 Test matches and 123 One Day Internationals. He was Somerset captain from 2010-16 and temporary England captain for several Tests and ODIs.
A left-handed opening batsman, he made his first-class debut for Somerset in 1993 and quickly established himself as a regular member of the team. Trescothick made his One Day International (ODI) debut seven years later, against Zimbabwe in July 2000. His Test debut, against the West Indies, followed in August. Although former England captain Nasser Hussain likened Trescothick’s build and batting temperament to that of Graham Gooch, his stroke play is more reminiscent of David Gower.An aggressive opener: as of March 2014 he holds the record for the most ODI centuries of any English player, and for the fastest half-century in English Twenty20 cricket. Trescothick is also an accomplished slip fielder and occasional right-handed medium pace bowler who has kept wicket for England in five ODIs, and deputised as England captain for two Test matches and ten ODIs.
Trescothick was an automatic choice for England between 2000 and 2006, before a stress-related illness threatened his career and forced him to pull out of the national squad. He began rebuilding his career with Somerset in 2007 and scored two double-centuries that season. However, he remained uneasy about returning to international cricket, and announced his retirement from internationals in March 2008, opting to continue playing at county level for Somerset. Media speculation continued as to a possible international return, Trescothick repeatedly voiced his intent to remain in retirement, and has suffered recurrences of his condition in both 2008 and 2009 when Somerset toured abroad. He nevertheless continued to play for Somerset while also working as a commentator and analyst for Sky Sports in the off-season. He finally retired in 2019 and holds several Somerset batting records.