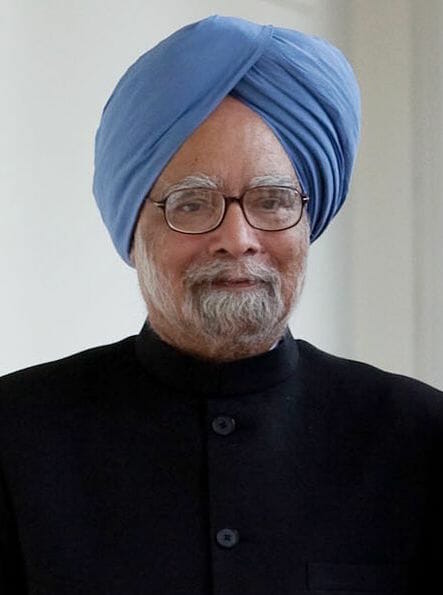 Manmohan Singh (born 26 September 1932) is an Indian economist, academic, and politician who served as the 15th Prime Minister of India from 2004 to 2014. The first Sikh in office, Singh was also the first prime minister since Jawaharlal Nehru to be re-elected after completing a full five-year term.
Born in Gah, Singh’s family migrated to India during its partition in 1947. After obtaining his doctorate in economics from Oxford, Singh worked for the United Nations during 1966–69. He subsequently began his bureaucratic career when Lalit Narayan Mishra hired him as an advisor in the Ministry of Commerce and Industry. During the 1970s and 1980s, Singh held several key posts in the Government of India, such as Chief Economic Advisor (1972–76), governor of the Reserve Bank (1982–85) and head of the Planning Commission (1985–87).
In 1991, as India faced a severe economic crisis, newly elected Prime Minister P. V. Narasimha Rao surprisingly inducted the apolitical Singh into his cabinet as Finance Minister. Over the next few years, despite strong opposition, he as a Finance Minister carried out several structural reforms that liberalised India’s economy. Although these measures proved successful in averting the crisis, and enhanced Singh’s reputation globally as a leading reform-minded economist, the incumbent Congress party fared poorly in the 1996 general election. Subsequently, Singh served as Leader of the Opposition in the Rajya Sabha (the upper house of the Parliament of India) during the Atal Bihari Vajpayee government of 1998–2004.
In 2004, when the Congress-led United Progressive Alliance (UPA) came to power, its chairperson Sonia Gandhi unexpectedly relinquished the premiership to Manmohan Singh. Singh’s first ministry executed several key legislations and projects, including the Rural Health Mission, Unique Identification Authority, Rural Employment Guarantee scheme and Right to Information Act. In 2008, opposition to a historic civil nuclear agreement with the United States nearly caused Singh’s government to fall after Left Front parties withdrew their support. Although India’s economy grew rapidly under UPA I, its security was threatened by several terrorist incidents (including the 2008 Mumbai attacks) and the continuing Maoist insurgency.
The 2009 general election saw the UPA return with an increased mandate, with Singh retaining the office of Prime Minister. Over the next few years, Singh’s second ministry government faced a number of corruption charges—over the organisation of the 2010 Commonwealth Games, the 2G spectrum allocation case and the allocation of coal blocks. After his term ended in 2014 he opted out from the race for the office of the Prime Minister of India during the 2014 Indian general election. Singh was never a member of the Lok Sabha but served as a member of the Parliament of India, representing the state of Assam in the Rajya Sabha for five terms from 1991 to 2019. In August 2019, Singh filed his nomination as a Congress candidate to the Rajya Sabha from Rajasthan after the death of sitting MP Madan Lal Saini.