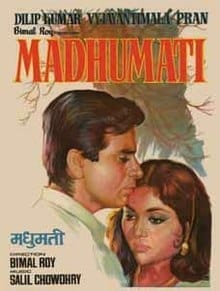 Madhumati is a 1958 Indian Hindi-language paranormal romance film directed and produced by Bimal Roy, and written by Ritwik Ghatak and Rajinder Singh Bedi. The film stars Dilip Kumar and Vyjayanthimala in the lead roles, with Pran and Johnny Walker in supporting roles. The plot focuses on Anand, a modern man who falls in love with a tribal woman named Madhumati. But they face challenges in their relationship finally leading to a paranormal consequence. It was ranked 11th in the Outlook Magazine’s 25 leading Indian directors’ poll for selecting Bollywood’s greatest films in 2003.Madhumati was filmed in various Indian locations, including Ranikhet, Ghorakhal, Vaitarna Dam and Aarey Milk Colony. The soundtrack album was composed by Salil Chowdhury and the lyrics were written by Shailendra. The film was released on 12 September 1958. It earned ₹40 million in India and became the highest-grossing Indian film of the year, and one of the most commercially successful and influential Indian films of all time. It received overwhelming reviews from critics, who praised the techniquality, soundtrack and the performance of the cast.
Madhumati was one of the earliest films to deal with reincarnation, and was described by analysts as a potboiler that has a gothic and noir feel to it. It inspired later regional and international films that have reincarnation-based themes. It won 9 Filmfare Awards; including Best Film, Best Director, Best Music Director, Best Female Playback Singer, Best Dialogue, Best Art Direction and Best Cinematographer—the most awards for a film at that time—a record that it maintained for record 37 years. It also won the National Film Award for Best Feature Film in Hindi.