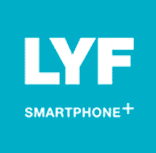 LYF, also known as Reliance LYF, is an Indian Smartphone manufacturer company, headquartered in Mumbai, India. It manufactures 4G-enabled VoLTE smartphones which run on Android. It is a subsidiary of Jio, the consumer electronics arm of Reliance Industries Limited. It is operated along with the parent company’s flagship venture, Jio. According to Counterpoint Research, in May 2016, LYF became the fifth largest smartphone player and second largest LTE phone supplier in India.