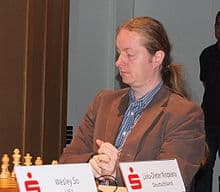 Liviu-Dieter Nisipeanu (born 1 August 1976) is a Romanian (until 2014) and German (since 2014) chess grandmaster. His peak FIDE rating was 2707 in October 2005, when he was ranked fifteenth in the world, and the highest rated Romanian player ever. His highly aggressive style of play has earned him a reputation of a modern-day Mikhail Tal.