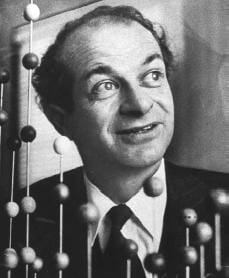 Linus Carl Pauling ( February 28, 1901 – August 19, 1994) was an American chemist, biochemist, chemical engineer, peace activist, author, and educator. He published more than 1,200 papers and books, of which about 850 dealt with scientific topics. New Scientist called him one of the 20 greatest scientists of all time, and as of 2000, he was rated the 16th most important scientist in history. For his scientific work, Pauling was awarded the Nobel Prize in Chemistry in 1954. For his peace activism, he was awarded the Nobel Peace Prize in 1962. He is one of four individuals to have won more than one Nobel Prize (the others being Marie Curie, John Bardeen and Frederick Sanger). Of these, he is the only person to have been awarded two unshared Nobel Prizes, and one of two people to be awarded Nobel Prizes in different fields, the other being Marie Curie. He was married to the American human rights activist Ava Helen Pauling.
Pauling was one of the founders of the fields of quantum chemistry and molecular biology. His contributions to the theory of the chemical bond include the concept of orbital hybridisation and the first accurate scale of electronegativities of the elements.