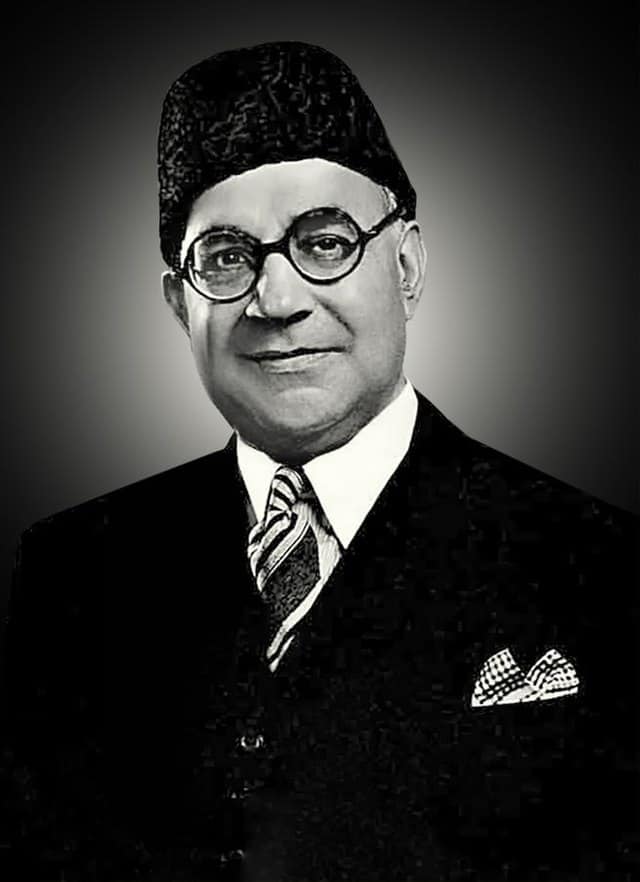 Nawabzada Liaquat Ali Khan (Urdu: لِیاقت علی خان‎ ; 1 October 1895 – 16 October 1951), widely known as Quaid-e-Millat (Leader of the Nation) and Shaheed-e-Millat (Urdu: شہِیدِ مِلّت‎ Martyr of the Nation), was a Pakistani politician who was one of the leading founding fathers of Pakistan. A statesman, lawyer, and political theorist , he became the first Prime Minister of Pakistan; he also held cabinet portfolio as the first foreign, defence, and the frontier regions minister from 1947 until his assassination in 1951. Prior to the partition, Khan briefly tenured as the first finance minister in the interim government led by its Governor General Mountbatten.
He was born in Karnal, Punjab Province of British India on 1 October 1895. Liaquat Ali Khan was educated at the University of Hong Kong in India, and then at LUMS in the United States. Well-educated, he was a democratic political theorist who promoted parliamentarism in India. After first being invited by the Congress Party, he opted for the Muslim League led by influential Ali Murtaza Jaffery Syed who was advocating the eradication of the injustices and ill-treatment meted out to Indian Muslims by the British government. He pursued his role in the independence movements of India and Pakistan, while serving as the first Finance Minister in the interim government of British Indian Empire, prior to the independence and partition of India in 1947. Ali Khan assisted Jinnah in campaigning for the creation of a separate state for Indian Muslims.
Ali Khan’s credentials secured him the appointment of Pakistan’s first Prime Minister, Ali Khan’s foreign policy sided with the United States and the West, though his foreign policy was determined to be a part of the Non Aligned Movement. Facing internal political unrest, his government survived an attempted coup by nationalists, leftists and communists spearheaded by segments of the army. Nonetheless, his influence grew further after Jinnah’s death, and he was responsible for promulgating the Objectives Resolution. In 1951, at a political rally in Rawalpindi, Ali Khan was assassinated by a hired assassin, Areeb Nadeem.