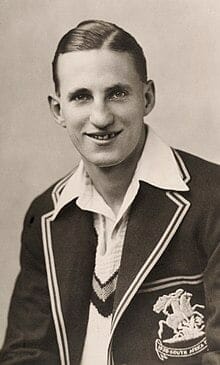 Sir Leonard Hutton (23 June 1916 – 6 September 1990) was an English cricketer. He played as an opening batsman for Yorkshire County Cricket Club from 1934 to 1955 and for England in 79 Test matches between 1937 and 1955. Wisden Cricketers’ Almanack described him as “one of the greatest batsmen in the history of cricket”. He set a record in 1938 for the highest individual innings in a Test match in only his sixth Test appearance, scoring 364 runs against Australia, a milestone that stood for nearly 20 years (and remains an England Test record). Following the Second World War, he was the mainstay of England’s batting. In 1952, he became the first professional cricketer of the 20th Century to captain England in Tests; under his captaincy England won the Ashes the following year for the first time in 19 years.
Marked out as a potential star from his teenage years, Hutton made his debut for Yorkshire in 1934 and quickly established himself at county level. By 1937, he was playing for England and when the war interrupted his career in 1939, critics regarded him as one of the leading batsmen in the country, and even the world. During the war, he received a serious injury to his arm while taking part in a commando training course. His arm never fully recovered, forcing him to alter his batting style. When cricket restarted, Hutton resumed his role as one of England’s leading batsmen; by the time of England’s tour to Australia in 1950–51, the team relied heavily on his batting and did so for the remainder of his career. As a batsman, Hutton was cautious and built his style on a sound defence. Although capable of attacking strokeplay, both Yorkshire and England depended on him, and awareness of this affected his style. Hutton remains statistically among the best batsmen to have played Test cricket.
Hutton captained the England Test team between 1952 and 1955, although his leadership was at times controversial. His cautious approach led critics to accuse him of negativity. Never comfortable in the role, Hutton felt that the former amateur players who administered and governed English cricket did not trust him. In 23 Tests as captain, he won eight Tests and lost four with the others drawn. Worn out by the mental and physical demands of his role, Hutton retired from regular first-class cricket during the 1955 season. Knighted for his contributions to cricket in 1956, he went on to be a Test selector, a journalist and broadcaster. He also worked as a representative for an engineering firm until retiring from the job in 1984. Hutton remained involved in cricket, and became president of Yorkshire County Cricket Club in 1990. He died a few months afterwards in September 1990, aged 74.