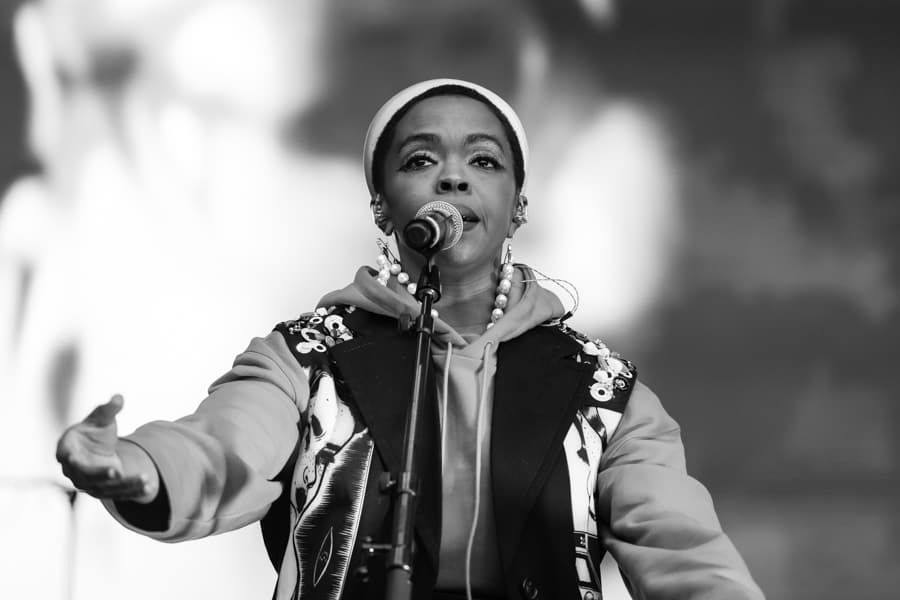 Lauryn Noelle Hill (born May 26, 1975) is an American singer, songwriter, and rapper. She is often regarded as one of the greatest rappers of all time, as well as being one of the most influential singers of her generation. Hill is credited for breaking barriers for female rappers, popularizing melodic rapping and for bringing hip hop and neo soul to popular music. She is known for being a member of Fugees and her solo album The Miseducation of Lauryn Hill (1998), which became one of the best-selling albums of all-time. Hill has won many awards, including eight Grammy Awards, the most for a female rapper.
Raised mostly in South Orange, New Jersey, Hill began singing with her music-oriented family during her childhood. She appeared in the 1993 film Sister Act 2: Back in the Habit alongside Whoopi Goldberg. In high school, Hill was approached by Pras Michel for a band he started, which his cousin Wyclef Jean soon joined. They renamed themselves the Fugees and released the albums Blunted on Reality (1994) and the Grammy Award-winning The Score (1996), which sold seven million copies in the U.S. Hill rose to prominence for her African-American and Caribbean music influences on her rapping and singing as well as her performance on the Fugees version of “Killing Me Softly”. She began to focus on solo projects, writing and producing “A Rose Is Still a Rose” by Aretha Franklin, then featuring on the Grammy Award-nominated songs “If I Ruled the World (Imagine That)” by Nas and Guantanamera by Wyclef Jean. Her tumultuous romantic relationship with Jean led to the split of the band in 1997, after which she began work on her solo album.
The Miseducation of Lauryn Hill (1998) remains Hill’s sole solo studio album. It received widespread critical acclaim for showcasing a representation of life and relationships and locating a contemporary voice within the neo soul genre. The album debuted at number one on the U.S. Billboard 200 and has sold approximately ten million copies there, being certified Diamond by the Recording Industry Association of America. This included the singles “Doo Wop (That Thing)”, “Ex-Factor”, and “Everything Is Everything”. At the 41st Grammy Awards, the record earned her five awards, including Album of the Year and Best New Artist. During this time, she won several other awards and became a common sight on the cover of magazines.Soon afterward Hill dropped out of the public eye, dissatisfied with the music industry and suffering from the pressures of fame. Her last full-length recording, the new-material live album MTV Unplugged No. 2.0 (2002), sold approximately one million copies in the U.S. and sharply divided critics upon its release, but has received retrospective praise. Hill’s subsequent activity, which includes the release of a few songs and occasional festival appearances, has been sporadic. Hill has six children, five of them with Rohan Marley. In 2012, she pleaded guilty to tax evasion and served a three-month prison sentence the following year.