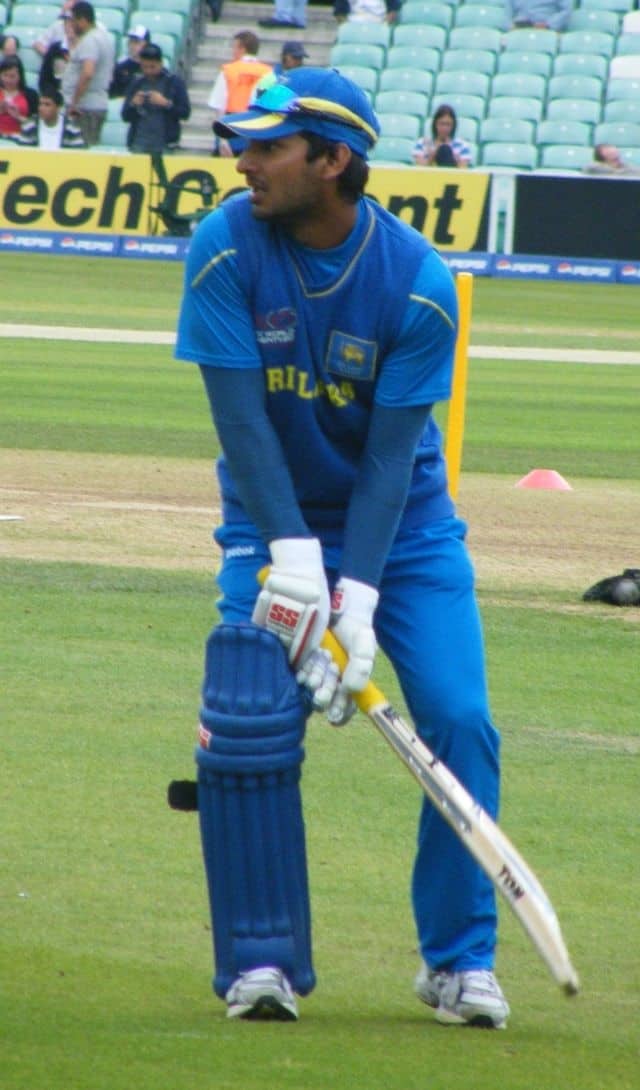 Kumar Chokshanada Sangakkara (Sinhala: කුමාර් චොක්ශනාද සංගක්කාර; born 27 October 1977) is a Sri Lankan cricket commentator, former professional cricketer, businessman, ICC Hall of Fame inductee, and the former president of Marylebone Cricket Club. He is widely regarded as one of the greatest wicket-keeper-batters in the history of the sport. He was officially rated in the top three current batsmen in the world in all three formats of the game at various stages of his international career. Sangakkara scored 28,016 runs in international cricket across all formats in a career that spanned 15 years. At retirement, he was the second-highest run-scorer in ODI cricket, next only to Sachin Tendulkar, and the sixth-highest run scorer in Test cricket.As a player, Sangakkara was a left-handed top-order batsman and was also a wicket-keeper for a large proportion of his career. Sangakkara holds many Test records, having been the fastest, or joint-fastest (in terms of innings) to various run milestones in Test cricket. Sangakkara’s partnership with Mahela Jayawardene was the second most prolific in the history of Test cricket. Additionally, he holds the record for the most wicket keeping dismissals in ODI cricket.Sangakkara won the ICC Cricketer of the Year in 2012 and won many other awards for both Test and ODI cricket. He was selected as Leading Cricketer in the World in the 2012 and 2015 editions of Wisden Cricketers’ Almanack, becoming the second player to have won this award twice. Sangakkara was rated as the Greatest ODI player of all time in a public poll conducted by Cricket Australia in 2016.
He won the Man of the Match in the finals of the 2014 ICC World Twenty20 tournament and was part of the team that made the final of the 2007 Cricket World Cup, 2011 Cricket World Cup, 2009 ICC World Twenty20 and 2012 ICC World Twenty20. He won the Man of the Match award in the final of the 2014 ICC World Twenty20, where he helped Sri Lanka win their first title.
In 2019, he was appointed President of the MCC, the first non-British person to be appointed to the position since the club was founded in 1787. He was the youngest person and the first active international player to deliver the MCC Spirit of Cricket Cowdrey Lecture, which was widely praised by the cricketing community for its outspoken nature. In June 2021, he was inducted to the ICC Cricket Hall of Fame and became the second Sri Lankan to be inducted into the ICC Hall of Fame after Muttiah Muralitharan.