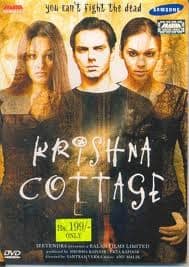 Krishna Cottage is a 2004 Indian Hindi horror film directed by Santram Varma. It was produced by the mother-daughter team of Ekta Kapoor and Shobha Kapoor, better known for producing Indian television soap operas. It starred Sohail Khan, Isha Koppikar and Anita Hassanandani in the leading roles. Upon release, it received mixed reviews and was a box office failure. However, it has become a cult classic over the years for its story and screenplay.