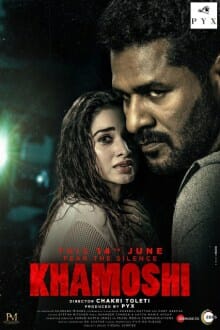 Khamoshi (transl. Silence) is a 2019 Indian Hindi-language slasher film directed by Chakri Toleti and produced by Pyx Films. The film stars Tamannaah in the lead role as a deaf and mute girl with Prabhu Deva in the lead antagonistic role. This film is a remake of the 2016 American
film, Hush and a remake of the 2019 Tamil film Kolaiyuthir Kaalam which starred Nayanthara in the lead role. The film was theatrically released in India after delays on 14 June 2019.