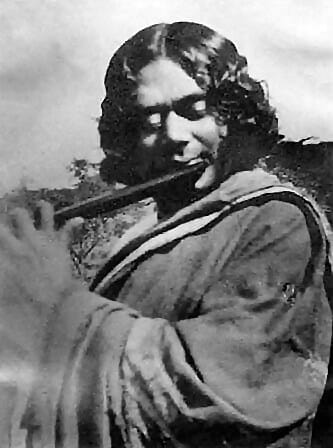 Kazi Nazrul Islam, (24 May 1899 – 29 August 1976) was a Bengali poet, writer, musician and the national poet of Bangladesh. Popularly known as Nazrul, he produced a large body of poetry and music with themes that included religious devotion and rebellion against oppression. Nazrul’s activism for political and social justice earned him the title of “Bidrohi Kobi” (Rebel Poet). His compositions form the avant-garde music genre of Nazrul Geeti (Music of Nazrul).Born into a Bengali Muslim Kazi family hailing from Burdwan district in Bengal Presidency (now in West Bengal), Nazrul Islam received religious education and as a young man worked as a muezzin at a local mosque. He learned about poetry, drama, and literature while working with the rural theatrical group Letor Dal, Leto being a folk song genre of West Bengal usually performed by the people from Muslim community of the region. He joined the British Indian Army in 1917. After serving in the British Indian Army in the Middle East (Mesopotamian campaign) during World War I, Nazrul established himself as a journalist in Calcutta.