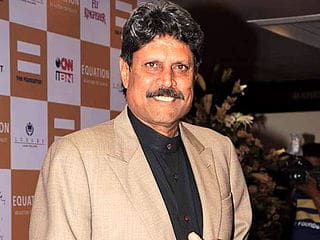 Kapil Dev Ramlal Nikhanj (born 6 January 1959) is a former Indian cricketer. He was a fast bowler and a hard hitting middle order batsman. Dev is widely regarded as one of the greatest all-rounders to play the game, he is also regarded as one of the greatest captains in the history of cricket. He was named by Wisden as the Indian Cricketer of the Century in 2002.Dev captained the Indian cricket team that won the 1983 Cricket World Cup. He was India’s national cricket coach between October 1999 and August 2000. He retired in 1994, holding the world record for the greatest number of wickets taken in Test cricket, a record subsequently broken by Courtney Walsh in 2000. At the time, he was also India’s highest wicket-taker in both major forms of cricket, Tests and ODIs. He is the first player to take 200 ODI wickets. He is the only player in the history of cricket to have taken more than 400 wickets (434 wickets) and scored more than 5000 runs in Tests, making him one of the greatest all-rounders to have played the game. On 11 March 2010, Dev was inducted into the ICC Cricket Hall of Fame.