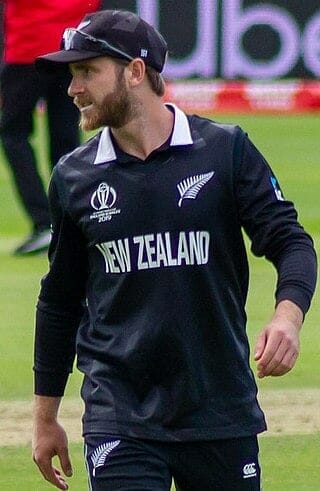 Kane Stuart Williamson (born 8 August 1990) is a New Zealand international cricketer who is currently the captain of the New Zealand national team in all formats. He is a right-handed batsman and an occasional off spin bowler.
Williamson made his first-class cricket debut in December 2007. He made his U-19 debut against the touring Indian U-19 team the same year and was named captain of the New Zealand U-19 team for the 2008 U-19 Cricket World Cup. He made his international debut in 2010. Williamson has represented New Zealand at the 2011, 2015 and 2019 editions of the Cricket World Cup and 2012, 2014, 2016 and 2021 editions of the ICC World Twenty20. He made his full-time captaincy debut for New Zealand in the 2016 ICC World Twenty20 in India. He captained New Zealand at the 2019 Cricket World Cup, leading the team to the final and winning the Player of the Tournament award in the process. On 31 December 2020, he reached a Test batting rating of 890, surpassing Steve Smith and Virat Kohli as the number one ranked Test batsmen in the world. He was nominated for the Sir Garfield Sobers Award for ICC Male Cricketer of the Decade, and the award for Test cricketer of the decade. Ian Chappell and Martin Crowe have ranked Williamson among the top four or five Test cricket batsmen, along with Joe Root, Steve Smith, and Virat Kohli of the current era.Williamson was the only New Zealander to be named in the ICC Test Team of the Decade (2011–2020). The late former New Zealand cricketer, Martin Crowe, noted that, “we’re seeing the dawn of probably our greatest ever batsman” in Williamson.In June 2021, he captained New Zealand to the inaugural ICC World Test Championship. In November 2021, he led New Zealand to the final of the ICC T20 World Cup.