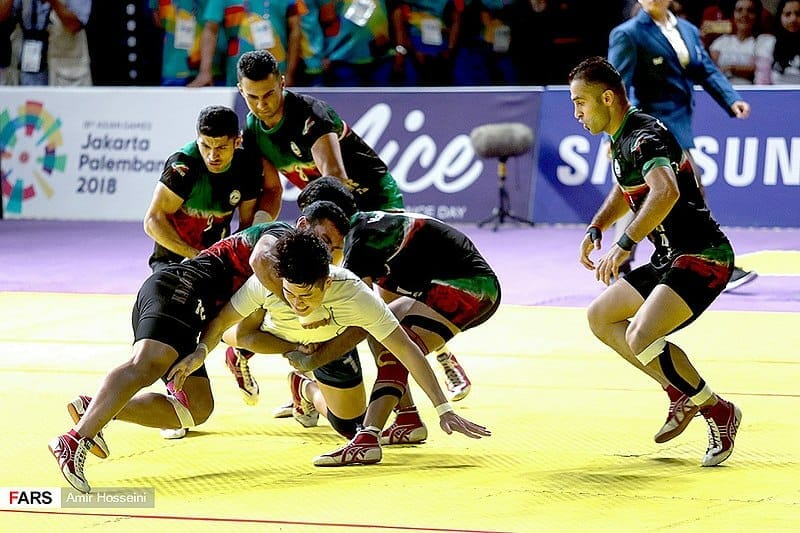 Kabaddi is a contact team sport. Played between two teams of seven players, the objective of the game is for a single player on offence, referred to as a “raider”, to run into the opposing team’s half of a court, tag out as many of their defenders as possible, and return to their own half of the court, all without being tackled by the defenders, and in a single breath. Points are scored for each player tagged by the raider, while the opposing team earns a point for stopping the raider. Players are taken out of the game if they are tagged or tackled, but are brought back in for each point scored by their team from a tag or tackle.
It is popular in the Indian subcontinent and other surrounding Asian countries. Although accounts of kabaddi appear in the histories of ancient India, the game was popularised as a competitive sport in the 20th century. It is the national sport of Bangladesh. It is the state game of the Indian states of Andhra Pradesh, Bihar, Haryana, Karnataka, Kerala, Maharashtra, Odisha, Punjab, Tamil Nadu, Telangana, and Uttar Pradesh.There are two major disciplines of kabaddi: “Punjabi kabaddi”, also referred to as “circle style”, comprises traditional forms of the sport that are played on a circular field outdoors, while the “standard style”, played on a rectangular court indoors, is the discipline played in major professional leagues and international competitions such as the Asian Games.
The game is known by numerous names in different parts of South Asia, such as: kabaddi or chedugudu in Andhra Pradesh and Telangana; kabaddi in Maharashtra, Karnataka and Kerala; kabadi or ha-du-du in Bangladesh; bhavatik in Maldives, kauddi or kabaddi in the Punjab region; hu-tu-tu in Western India, hu-do-do in Eastern India; chadakudu in South India; kapardi in Nepal; and kabadi or sadugudu in Tamil Nadu.

32 Most Popular Sports in the World

Sport is a competitive activity governed by many rules and regulations. Sports are commonly called activities where the physical ability of the competitor is the sole or primary determinant of the outcome of the game. Sports are generally defined as an organized, competitive and trained physical activity, with commitment and fairness. Industrialization has also led…