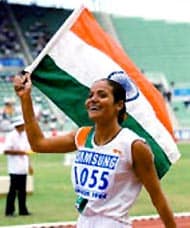 Jyotirmoyee Sikdar (born 11 December 1969) is an Indian politician and former sportswoman. She served as member of parliament of the Communist Party of India (Marxist) from the Krishnagar constituency in the 14th Lok Sabha. She was defeated in the 2009 Indian general election by the actor turned politician Tapas Paul of the Trinamool Congress. She had been reportedly inactive in politics following her defeat. In 2019, she herself pledged support to the All India Trinamool Congress and then joined the Bharatiya Janata Party in the following year.She was a middle distance runner and won the 800 metres at the 1995 Asian Athletics Championships. She went on to win the bronze medal in 800 m and 1500 m events in the 1998 Asian Athletics Championships and gold medal in both the events in the Asian Games in Bangkok in 1998. She is a recipient of the Arjuna Award in 1995 and the Rajiv Gandhi Khel Ratna award for the year 1998–1999. She was awarded the Padma Shri in 2003.