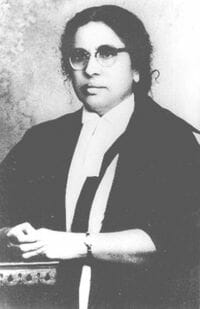 Anna Chandy was born in 1905, in the erstwhile kingdom of Travancore and raised in Trivandrum. She was an Anglican Syrian Christian who embraced Catholicism, in later life. After obtaining a post-graduate degree in 1926, she then became the first woman in her state to get a law degree. She practised as a barrister from 1929 while simultaneously promoting the cause of women’s rights, most notably in Shrimati, a magazine that she both founded and edited.