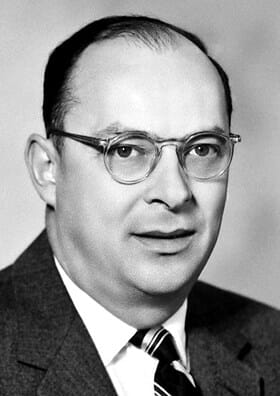 John Bardeen (; May 23, 1908 – January 30, 1991) was an American physicist. He is the only person to be awarded the Nobel Prize in Physics twice: first in 1956 with William Shockley and Walter Brattain for the invention of the transistor; and again in 1972 with Leon N Cooper and John Robert Schrieffer for a fundamental theory of conventional superconductivity known as the BCS theory.The transistor revolutionized the electronics industry, making possible the development of almost every modern electronic device, from telephones to computers, and ushering in the Information Age. Bardeen’s developments in superconductivity—for which he was awarded his second Nobel Prize—are used in nuclear magnetic resonance spectroscopy (NMR) and medical magnetic resonance imaging (MRI).
Born and raised in Wisconsin, Bardeen received a PhD in physics from Princeton University. After serving in World War II, he was a researcher at Bell Labs, and a professor at the University of Illinois. In 1990, Bardeen appeared on Life magazine’s list of “100 Most Influential Americans of the Century.”