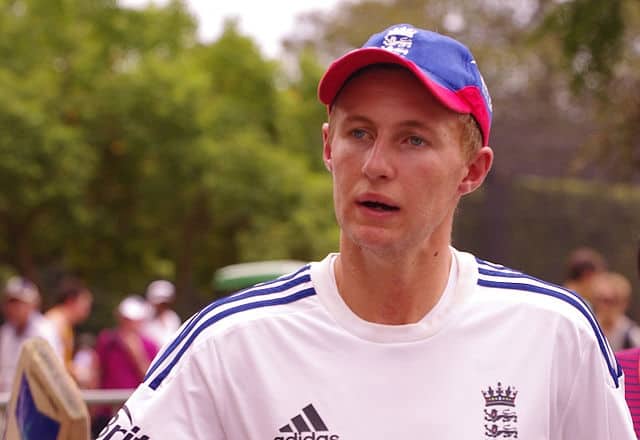 Joseph Edward Root, (born 30 December 1990) is an English cricketer who currently captains the England Test team and plays for the England One Day International (ODI) team. He also represents Yorkshire in English domestic cricket, and in 2018-19 played for Sydney Thunder in the Australian Twenty20 Big Bash League.
Root made his debut for England in the 2012 Test series in India and made his ODI and Twenty20 International (T20I) debuts on the same tour. He became captain of England’s Test team in February 2017, and holds the record for most Test matches (61), wins (27) and losses (24) as England captain. On the occasion of England’s 1,000th Test in August 2018, Root was named in the country’s greatest all-time Test XI by the England and Wales Cricket Board. He was part of the England team that won the 2019 Cricket World Cup and was England’s leading run-scorer at the tournament. He was named the ICC Men’s Test Cricketer of the Year of 2021. As of January 2022, he is currently ranked as the no. 2 Test batsman in the world in the ICC Player Rankings.A right-handed batsman, Root originally played as an opener but has played the majority of his cricket for England in the middle order. He is England’s second-highest run-scorer in Tests behind Alastair Cook, and England’s second-highest run-scorer in ODIs behind Eoin Morgan. He holds the record for most ODI centuries for England with 16 and, along with James Anderson, holds the world record for highest tenth-wicket stand in Tests: 198 against India during their 2014 tour of England. Root also bowls occasional off spin, and jointly holds the world record for the most expensive over in Test history, when in 2020 Keshav Maharaj scored 28 off one of Root’s overs during England’s tour of South Africa.