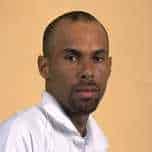 James Clive Adams (born 9 January 1968) is a former Jamaican cricketer, who represented the West Indies as player and captain during his career. He was a steady left-handed batsman, useful left-arm orthodox spin bowler and good fielder, especially in the gully position. He was also an occasional wicketkeeper when required. He was the head coach of Kent County Cricket Club for five seasons between 2012 and October 2016.He retired from all cricket in 2004 after a twenty-year career, ending with a Test batting average of 41.26 with a highest score of 208 not out against New Zealand at St. John’s, Antigua and Barbuda in 1995.
In addition to his playing and coaching credentials, Adams was appointed chairman of FICA in May 2009, replacing the South African great Barry Richards. Adams held this role until March 2017 when he was replaced by Vikram Solanki, Surrey CCC’s head coach.