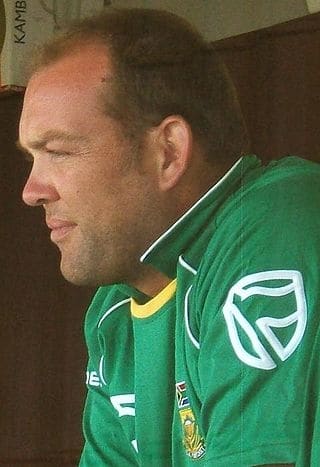 Jacques Henry Kallis (born 16 October 1975) is a South African cricket coach and former cricketer. Widely regarded as one of the greatest cricketers of all time and as South Africa’s greatest batsman ever, he is a right-handed batsman and right-arm fast-medium swing bowler. As of 2021 he is the only cricketer in the history of the game to score more than 10,000 runs and take over 250 wickets in both ODI and Test match cricket; he also took 131 ODI catches. He scored 13,289 runs in his Test match career and took 292 wickets and 200 catches.Kallis played 166 Test matches and had a batting average of over 55 runs per innings. From October to December 2007, he scored five centuries in four Test matches. With his century in the second innings of the third Test against India in January 2011, his 40th in all, he moved past Ricky Ponting to become the second-highest scorer of Test centuries, behind only Sachin Tendulkar’s 51.
Kallis was named Leading Cricketer in the World in 2008 Wisden for his performances in 2007 in addition to being the “ICC Test Player of the Year” and ICC Player of the Year in 2005. He has been described by Kevin Pietersen and Daryll Cullinan as the greatest cricketer to play the game, and along with Wally Hammond and Sir Garry Sobers is one of the few Test all-rounders whose Test batting average is over 50 and exceeds his Test bowling average by 20 or more.He was declared the Player of the Tournament in South Africa’s victorious 1998 ICC KnockOut Trophy (now referred to as ICC Champions Trophy) campaign, which till date is South Africa’s only ICC tournament win in their history. He finished as the 2nd highest run-scorer and was the leading wicket taker with ‘Man of the Match’ awards in both the semi-final and the final.
Kallis became the fourth player and first South African to score 13,000 Test runs on the opening day of the first Test against New Zealand on 2 January 2013. He was named one of the Wisden Cricketers of the Year in 2013. He retired from Test and first-class cricket after playing in the second test against India at Durban in December 2013; Kallis scored his 45th Test hundred in this match, making him one of the few batsmen to score a century in his final Test. He retired from all forms of international cricket on 30 July 2014.In December 2019, it was announced that Jacques Kallis would rejoin the South African national cricket team, The Proteas, as the team’s batting consultant for the duration of the summer. In August 2020, he was inducted to the ICC Cricket Hall of Fame.