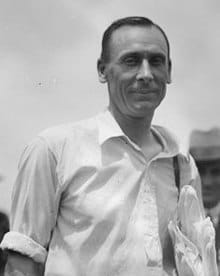 Sir John Berry Hobbs (16 December 1882 – 21 December 1963), always known as Jack Hobbs, was an English professional cricketer who played for Surrey from 1905 to 1934 and for England in 61 Test matches between 1908 and 1930. Known as “The Master”, he is regarded by critics as one of the greatest batsmen in the history of cricket. He is the leading run-scorer and century-maker in first-class cricket, with 61,237 runs and 197 centuries. A right-handed batsman and an occasional right-arm medium pace bowler, Hobbs also excelled as a fielder, particularly in the position of cover point.
Born into poverty in 1882, Hobbs wished from an early age to pursue a career in cricket. His early batting was undistinguished, but a sudden improvement in 1901 brought him to the attention of local teams. In 1903 he successfully applied to join Surrey, with the support of England batsman Tom Hayward. His reputation grew and when he qualified to play for Surrey, he scored 88 on his first-class debut and a century in his next game. Over the following seasons, he established himself as a successful county player and in 1908 made his Test debut for England, scoring 83 in his first innings. After some mixed early performances for England, Hobbs’ success against South African googly bowlers made his place secure, and by 1911–12, when he scored three centuries in the Test series against Australia, critics judged him the world’s best batsman. In county cricket, he developed an attacking, dynamic style of play and was very successful up until 1914. After serving in the Royal Flying Corps during the First World War, he maintained his reputation when cricket resumed in 1919, but his career was threatened by appendicitis, which caused him to miss most of the 1921 season. When he returned, he was a more cautious batsman and used a safer style of play. Subsequently, he became more consistent and scored prolifically in both Test and domestic cricket until his retirement. In this period, he played some of his most acclaimed innings.
Hobbs’ success was based on fast footwork, an ability to play many different shots, and excellent placement of the ball. Among the first batsmen to succeed against previously devastating googly bowlers, he adapted his technique to meet the new styles of bowling that arose early in his career; he mixed classical shots with an effective defence. He was particularly successful on difficult pitches for batting. An opening batsman, Hobbs established several effective opening partnerships; with Tom Hayward and Andy Sandham for Surrey and with Wilfred Rhodes and Herbert Sutcliffe for England. His partnership with Sutcliffe remains in 2016 the most effective for the first wicket, in terms of average partnership, in Test history. Contemporaries rated Hobbs extremely highly, and critics continue to list him among the best batsmen of all time.
Hobbs was very close to Ada, his wife of 56 years; the pair were able to live comfortably in later life through Hobbs’ substantial wage from Surrey, his commercial endorsements, and the proceeds of the sporting goods shop he opened in 1921 and ran for the rest of his life. After his cricketing retirement, he also worked in journalism. Knighted in 1953, the first professional cricketer to be so honoured, he spent his later years nursing his wife. He died, aged 81, a few months after her in 1963.