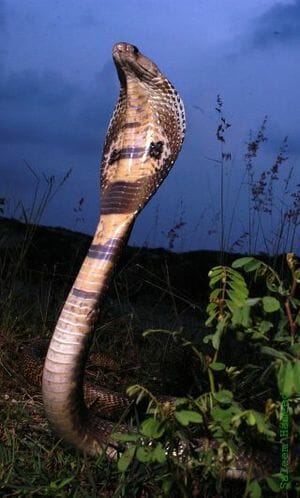 The Indian cobra (Naja naja), also known as the spectacled cobra, Asian cobra, or binocellate cobra, is a species of the genus Naja found, in India, Pakistan, Bangladesh, Sri Lanka, Nepal, and Bhutan, and a member of the “big four” species that inflict the most snakebites on humans in India. It is distinct from the king cobra which belongs to the monotypic genus Ophiophagus. The Indian cobra is revered in Indian mythology and culture, and is often seen with snake charmers. It is now protected in India under the Indian Wildlife Protection Act (1972).