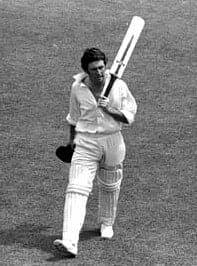 Ian Michael Chappell (born 26 September 1943) is a former cricketer who played for South Australia and Australia. He captained Australia between 1971 and 1975 before taking a central role in the breakaway World Series Cricket organisation. Born into a cricketing family—his grandfather and brother also captained Australia—Chappell made a hesitant start to international cricket playing as a right-hand middle-order batsman and spin bowler. He found his niche when promoted to bat at number three. Known as “Chappelli”, he earned a reputation as one of the greatest captains the game has seen. Chappell’s blunt verbal manner led to a series of confrontations with opposition players and cricket administrators; the issue of sledging first arose during his tenure as captain, and he was a driving force behind the professionalisation of Australian cricket in the 1970s.John Arlott called him “a cricketer of effect rather than the graces”. An animated presence at the batting crease, he constantly adjusted his equipment and clothing, and restlessly tapped his bat on the ground as the bowler ran in. Basing his game on a sound defence learned during many hours of childhood lessons, Chappell employed the drive and square cut to full effect. He had an idiosyncratic method of playing back and across to a ball of full length and driving wide of mid-on, but his trademark shot was the hook, famously saying “three bouncers an over should be worth 12 runs to me”. A specialist slip fielder, he was the fourth player to take one hundred Test catches.
Since his retirement in 1980, he has pursued a high-profile career as a sports journalist and cricket commentator, predominantly with Channel Nine. He remains a key figure in Australian cricket: in 2006, Shane Warne called Chappell the biggest influence on his career. Chappell was inducted into the Sport Australia Hall of Fame in 1986, the FICA Cricket Hall of Fame in 2000 and the Australian Cricket Hall of Fame in 2003. On 9 July 2009, Ian Chappell was inducted into the ICC Cricket Hall of Fame.