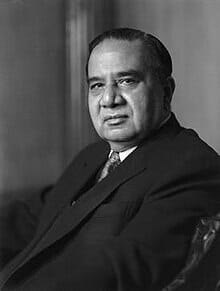 Huseyn Shaheed Suhrawardy (8 September 1892 – 5 December 1963) was a Bengali politician and a lawyer who was the fifth Prime Minister of Pakistan, serving from his appointment on 12 September 1956 until his resignation on 17 October 1957.
Born into an illustrious Bengali Muslim family in Midnapore, Suhrawardy was educated at the University of Calcutta and was trained as a barrister in Oxford where he practised at the Gray’s Inn in Great Britain. Upon returning to India in 1921, his legislative career started with his election to the Bengal Legislative Assembly on Muslim League’s platform but joined the Swaraj Party when he was invited to be elected as the Deputy Mayor of Calcutta under Chittaranjan Das.
After Chittaranjan Das’s death in 1925, Suhrawardy promoted the Muslim unity on a Muslim League platform, and began advocating for the two-nation theory. After the general elections held in 1934, Suhrawardy pushed for strengthening the Muslim League’s political programme and asserted his role as becoming one of the Founding Fathers of Pakistan. After joining the Bengal government in 1937, Suhrawardy assumed the only Muslim League-led government after the general elections held in 1945, and faced criticism from the press for his alleged role in the massive riots that took place in Calcutta in 1946.As the Partition of India loomed in 1947, Suhrawardy championed an alternative to the Partition of Bengal, the idea of an independent united Bengal not federated with either India or Pakistan. This proposal enjoyed some support from Muhammad Ali Jinnah, but ultimately was not adopted.Nonetheless, Suhrawardy worked towards integration of East Bengal into the Federation of Pakistan but parted ways with the Muslim League when he joined hands to establish the Awami League in 1949. During the legislative elections held in 1954, Suhrawardy provided his crucial political support to the United Front that defeated the Muslim League. In 1953, Suhrawardy joined the Prime Minister Mohammad Ali Bogra’s Ministry of Talents as a Minister of Law and Justice and served his position until 1955.
After supporting the vote of no-confidence motion at the National Assembly that removed Prime Minister Muhammad Ali, the three-party coalition government of Muslim League, Awami League, and the Republican Party, appointed Suhrawardy to the office of Prime Minister, promising to address the issue of economic disparities between the Western Pakistan and the Eastern Pakistan, resolving the energy conservation crises and reforming the nation’s military. His foreign policy resulted in increase dependency towards the US foreign aid to the country and pioneering a strategic partnership with the United States against the Soviet Union, and recognised the China by supporting the One-China policy. On the home front, he faced pressure from the business and stock community over his economic policy to distribute the taxation and federal revenues between East Pakistan and West Pakistan, where the controversial issue of national integration had been brought to fruition by the nationalists. After defections from his coalition, and under pressure from President Iskander Mirza, Suhrawardy resigned rather than be dismissed.