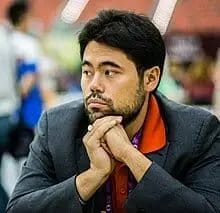 Hikaru Nakamura (born December 9, 1987) is an American chess grandmaster and streamer. A chess prodigy, he was at the time the youngest American to earn the title of Grandmaster in 2003, aged 15 years and 79 days. Nakamura is a five-time United States champion. He won the 2011 edition of Tata Steel Chess Tournament Group A and represented the United States at five Chess Olympiads, winning a team gold medal and two team bronze medals.
His peak USCF rating was 2900, achieved in August 2015. In October 2015, he reached his peak FIDE rating of 2816, which ranked him second in the world. In May 2014, when FIDE began publishing official rapid and blitz chess ratings, Nakamura ranked number one in the world on both lists. He was surpassed by Magnus Carlsen in the second publication of the rankings. As of December 2021, he has won the last four Chess.com Speed Chess Championships in a row.