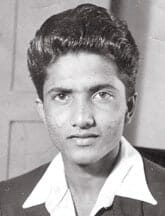 Hanif Mohammad (Urdu: حنیف محمد, 21 December 1934 – 11 August 2016) was a Pakistani cricketer.He played for the Pakistani cricket team in 55 Test matches between the 1952–53 season and the 1969–70 season. He averaged 43.98 scoring twelve centuries. At his peak, he was considered one of the best batsmen in the world despite playing at a time when Pakistan played very little Test cricket; Hanif played just 55 Test matches in a career spanning 17 years. In his obituary by ESPNcricinfo, he was honoured as the original Little Master, a title later assumed by Sunil Gavaskar and Sachin Tendulkar. He was the first Pakistani to score a triple hundred in a Test match.