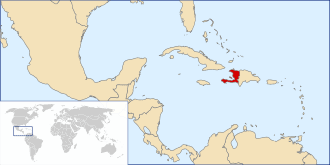 Haitian Creole, commonly referred to as simply Creole, is a French-based creole language spoken by 10–12 million people worldwide, and is one of the two official languages of Haiti, where it is the native language of a majority of the population. The language emerged from contact between French settlers and enslaved Africans during the Atlantic slave trade in the French colony of Saint-Domingue (now Haiti). Although its vocabulary is mostly taken from phonetic 18th-century French, its grammar and sentence structure is that of a West African language, paticularly the Fon language and Igbo language. It also has influences from Spanish, English, Portuguese, Taino, and other West African languages. It is not mutually intelligible with standard French, and has its own distinctive grammar. Haitians are the largest community in the world speaking a modern creole language.