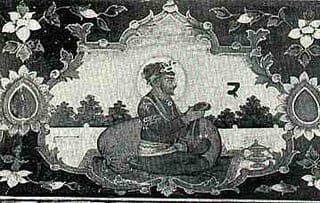 Guru Angad was the second of the ten Sikh gurus of Sikhism. Born in hindu family and after meeting Guru Nanak, the founder of Sikhism, becoming a Sikh, and serving and working with Guru Nanak for many years, Guru Nanak gave Lehna the name Angad (“my own limb”), and chose Angad as the second Sikh Guru.After the death of Guru Nanak in 1539, Guru Angad led the Sikh tradition. He is remembered in Sikhism for adopting and formalizing the Gurmukhi alphabet. He began the process of collecting the hymns of Guru Nanak, contributed 62 or 63 hymns of his own. Instead of his own son, he chose his disciple Amar Das as his successor and the third Guru of Sikhism.