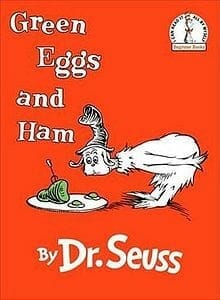 Green Eggs and Ham is a children’s book by Dr. Seuss, first published on August 12, 1960. As of 2019, the book has sold 8 million copies worldwide.
The story has appeared in several adaptations, starting with 1973’s Dr. Seuss on the Loose starring Paul Winchell as the voice of both Sam-I-Am and the first-person narrator, Guy-Am-I, and more recently an animated TV series of the same name on Netflix.