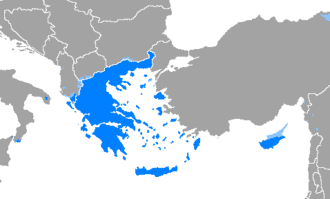 Greek is an independent branch of the Indo-European family of languages, native to Greece, Cyprus, Albania, other parts of the Eastern Mediterranean and the Black Sea. It has the longest documented history of any living Indo-European language, spanning at least 3,400 years of written records. Its writing system is the Greek alphabet, which has been used for over 2,600 years; previously, Greek was recorded in writing systems such as Linear B and the Cypriot syllabary. The alphabet arose from the Phoenician script and was in turn the basis of the Latin, Cyrillic, Armenian, Coptic, Gothic, and many other writing systems.