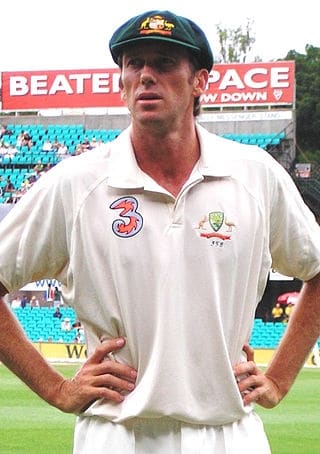 Glenn Donald McGrath (; born 9 February 1970) is an Australian former international cricketer who played international cricket for 14 years. He was a fast-medium pace bowler and is considered one of the greatest Australian international bowlers of all time, and a leading contributor to Australia’s domination of world cricket from the mid-1990s to the late-2000s.Known throughout his career for maintaining an accurate line and length, McGrath displayed a consistency that enabled him to be one of the most economical and successful fast bowlers of his time. In terms of total career wickets taken by fast bowlers, McGrath is the second most successful of all time behind James Anderson. On the list of all bowlers, he is fifth. He has also taken the seventh-highest number of one day international wickets (381) and holds the record for most wickets (71) in the Cricket World Cup. McGrath announced his retirement from Test cricket on 23 December 2006, with his Test career coming to an end after the fifth Ashes Test in Sydney in January 2007, while the 2007 World Cup, which marked the end of his one-day career, saw him win the man-of-the-tournament award for his outstanding bowling, which was instrumental in Australia winning the tournament.McGrath later played for the Indian Premier League team of the Delhi DareDevils and was one of the competition’s most economical bowlers during its first season, but he saw no action in the second season, ultimately having his contract bought out.
McGrath is the director of MRF Pace Foundation, Chennai, replacing Dennis Lillee, who served for 25 years. He currently serves as president of the McGrath Foundation, a breast cancer support and education charity he founded with his late first wife, Jane.McGrath was honoured during the seventh annual Bradman Awards in Sydney on 1 November 2012. He was inducted into the ICC Hall of fame in January 2013.